If you need an affordable desktop air purifier you should consider the  Levoit LV-H132. It’s a great little purifier at an affordable price. Plus it has a great design… much better than many of its competitors. It’s modern and its cylindrical shape takes up much less room in your office cubicle. It also has a great set of filters and zero gimmicky features. When it hit the market we jumped at the opportunity for a Levoit LV-H132 review. 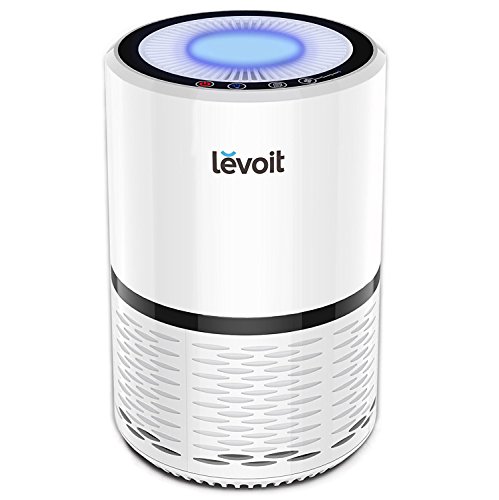 As you can see in the image above the Levoit is a good looking machine. We’d put it up there with the new line of purifiers from Blue Air. The housing is a glossy white plastic composite. It’s modern appearance lends it to use in a nice bathroom, bedroom, or home office. And, since it’s fairly small it isn’t going to interfere with all of the interior design work you’re done. There is a soft blue LED light on top of the purifier, which works very well as a night light.

When it comes to performance this compact purifier is sized for room measuring about 90 square feet. It also checks the boxes for the essentials we look for in a purifier of any size. We’ll cover those below, but rest assured there aren’t any gimmicks contained within its stylish case.

You’ll find similar filter setups in the best purifiers you can buy. The Levoit mimics the setup seen in high end brands like Austin Air, BlueAir, and Alen. It features a prefilter, true HEPA filter, and activated carbon filter. Now this purifier is not as powerful as those units, but it is a great way to cover a small space.

A prefilter is a great way to extend the life of your HEPA filter. A prefilter serves as shield of sorts by trapping larger particles that are relatively easy to capture. Smaller particles and gas pass through the prefilter to be captured in subsequent stages.

A prefilter is actually a fairly rare feature in a budget purifier. Many competitors in this space include only a HEPA filter… or worse yet a “HEPA style” filter.

You cannot wash the prefilter in this unit, but it can be vacuumed when dirty. Higher end models tend to offer washable pre filters, but for the price it’s hard to fault Levoit for such a small quirk.

One of the most difficult things to trap is odor and gas. Even the best HEPA filter cannot handle bathroom odor, VOCs, or cooking smells. Fortunately this purifier includes a filtration stage with activated carbon. Which is arguably the best way to remove gas , odor, and VOCs from the air you breathe.

In case you’re not familiar with the way activated carbon works; it’s basically a sponge for tiny particles. It’s used to purifier both air and water; and actually has been for centuries. Hospitals also use it to help soak up poinsions in the digestive tract.

Activated carbon works through a process known as adsorption. Basically the carbon provides a place for gases to adhere to, on a ridiculously large surface. Picture a small amount of activated carbon… perhaps a tablespoon full. Within that small amount of carbon, you could actually find acres of surface area. Wikipedia has a great article on it; you can read more about it if you’re interested. But, you can trust us when we say activated carbon is a miracle when it comes to pulling odor from the air.

A must have – the True HEPA filter

With just a few exceptions, you should always look for a true HEPA filter in a purifier. It’s one of the few way to capture PM 2.5 particles… some of the most harmful to your health. Most true HEPA filers will capture 99 percent of particles down to .3 microns in diameter. To give you an idea of how small that is; fine beach sand measures anywhere between 100 and 2,000 microns. Pet dander is typically in the .5 to 100 micron range. And the human eye cannot see particles smaller than 40 microns.

Pretty much the only thing that passes through a HEPA filter are gases. But, like we said above… that’s the job of the activated carbon filter.

When it comes to appearance there are only a few purifiers in this price range that look as nice as the LV-H132. The Levoit also has a nice heft to it. Combined the attractive design and heft give this purifier on similar priced option. most of which look like they were sold in the 80’s or 90’s. Is the build quality on par with high end units like the AirMega line? Not quite. But, for the price of an AirMega you could pick up a LV-H132 for every room in your home. And, maybe have cash left over for to buy a few for your neighbor’s home as well.

The cylindrical shape of the purifier also helps it beat out similarly priced purifiers. It has a very small footprint similar to the new Blue Pure units from Blue Air. In our opinion the size is just right. Smaller purifiers will never have the power to make much of an impact on air quality. Larger units are just not suited to desktop or bathroom counter use. This purifier is even small enough travel with. We probably wouldn’t, but if you have severe allergies it might be worthwhile.

The Levoit is also very easy to set up and use. The control panel is very intuitive. The controls are not only clearly marked… they are as sleek as the purifier they control. There is a power button, a nightlight control (off, dim, bright), and a fan speed button. You’ll also find a dirty filter indicator light. Which is pretty self explanatory.

At its highest setting this machine produces 43 dB. We’d call that fairly quiet. Kind of like a white noise machine. There are quieter purifiers available… but most competitors at this price point are louder. For comparison a Honeywell 50250-s churns out 50 dB on its lowest setting.

As you crank up the fan to higher settings it obviously gets louder. But, that just means it’s  moving more air. On high the purifier might be distracting to a neighboring cubicle. But, in your own office it wouldn’t prevent you from getting things done, or interrupt a phone call.

Don’t get this purifier for a huge master bedroom or large kitchen. It’s sized for rooms measuring 90 square feet. That’s on the lower end of what the average US bedroom measures. So buy it for small spaces like a bathroom or home office.

The LV-H132 is a great option if you have a smaller room to purify on a budget. And, compared to its competition it’s a clear winner. It has everything we look for in a purifier (HEPA, activated carbon, and a prefilter). It’s like a miniature high end purifier. Which makes it a perfect companion for the larger purifier in your home.

The only purifier we’d consider an equal to this one is the BluePure 411 . It’s about the same size. It also performs well and provides similar features. The big advantage with the 411 would be that it comes from a top tier purifier manufacturer.